The concept of evidence in legal terms includes material things or facts which are presented to council members in order to act as a method for determining the reality of any supposed lawsuit before the inquiring or inspecting authorities. The verdicts of the court are to be founded on the percent of honesty and genuineness of truth established on proof. 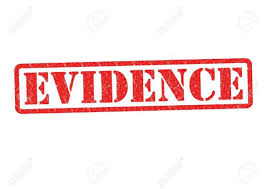 An essential obligation of courts is to direct legitimate procedures for the consideration of evidences in the court. The Evidence law is made up to a great extent of procedural guidelines concerning the authenticity of all the evidences presented. The numerous standards of proof that have advanced as per several sets of laws have been established on various underlying principles, experiences and formed by changing legitimate necessities with regards to permissible and adequate evidence.
It might be glaringly evident that the legal idea of law of evidence is discernible from that of the standard idea of evidence. In law there are numerous uncommon principles on what can or can’t be presented as proof in the Hon’ble Court or how proof is to be introduced and what are the uses of it or the quality or adequacy of proof expected to denote facts etc. Regardless of it, the law stays quiet on some essential issues. The judges in the court depend upon additional fundamentals of law in settling the genuine arguments or disputations under the steady gaze of the court or the jury. Scholastic attempts were made at efficient examination behind the research of these principles and fundamentals in order to find the true evidences or facts.

To produce the evidence of the accused the factors to rely upon include, evaluation of the veracity of the observer and the unwavering quality of his declaration. The individual who finds the true facts and evidences is liable for finding out where reality lies on contested inquiries and who will have the authority to settle the particular decision. It is the duty of the jury or the judge to search for true factual components in particular kinds of cases.

During the ancient period, the court system in India was not obliged by any specialized structure to bring about justice to the sufferers. Dharma held utmost importance, the fundamental objective was to support and validate dharma. Subsequent to documenting the plaint, the request was given to the contrary party to respond to the charges filed against them. Guidelines were set up identifying with confession, proceedings, rules and admission.

The preliminary stage included the trials held by the courts with the assistance of witnesses and reports presented on either side of the case in the court. The responsibility of producing the witnesses was in the hands of the appealing party. The responsibility of the king thereby was to analyse and examine the witnesses produced without any delay and to inspect and examine the witnesses produced and consider alongside revelations and disclosures made by them in the court. The witnesses ought to give an oath before producing the evidence. The witnesses were supposed to present their statement only within the premises of the court and not at any other place. It was only during the presence of the appealing or responding parties that the witnesses were permitted to give their proof in good faith.

As per the Hindu Dharma Shastras, it was laid down that, “the purpose of any trial is the desire to find out the truth”. Yajnavalkya stated that, “Discarding what is fraudulent; the King should give decisions in accordance with the true facts.” Necessary steps were taken by the Hindu Law in order to find reality from the conflicting cases made by two parties in general. As per the Hindu Shastras the parties coming into the court must be convinced to speak with honesty and genuineness. As per Vasistha in Hindu Law there were three sorts of proof or evidence which were important, Likhitam Sakshino Bukhti Parmanam Trividham Smritham i.e. Lekhya (Document), Sakshi (Witnesses) and Bukhthi (Possession). [2]

In Medieval times during the rule of Muslims in India, Sharia law or also referred to as Islamic law was accepted and obeyed by all the Kings and Emperors of Mughal Empire. It is as per the Quran that, Islamic laws related to crime in India, were followed and characterized on the precept of their customs and traditions.
Under Islamic Law, each man is put on an equivalent balance before God as the rule of equality for men held utmost importance, reason being that there was no framework with regards to classification of castes in their religion.

Under Islamic law, the proof of non-devotee i.e. Hindu was not permissible against the Muslims. At the point when individuals who were produced as witnesses before the court were considered ineffectual and unfitted if they had some relation within them. The proof may be oral or narrative. Records and books which were executed appropriately were acknowledged as proof. Records for proof executed by a female, minor or lawbreakers were considered as vitiated and unacceptable.

The Indian Evidence Act,1872 was basically established on the efforts and work of Sir James Fitzjames Stephen. Sir James Fitzjames Stephen is also referred to as the founding father of the Indian Evidence Act, 1872. The enactment was initially passed by the then existing Parliament of Britain in the year 1872. The act consists of several rules, guidelines and procedures which helps in administering the acceptability of any proof in the court of justice. Prior to the enactment of this particular law, the guidelines of evidence were relied upon fundamentals of customs or practices of general sets of laws of different religion and cultural groups of British India and were diverse for each individual who belonged to a different community or group. The idea of Admissibility of proof was completely changed after the presentation of Evidence Act in the courts of India.

Evidence law in India has grown and evolved with time. There were different facets of evidence law under different chapters of history in India. Each chapter has helped the laws to move gradually towards a much progressive state.