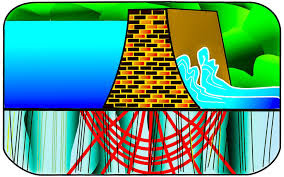 Groundwater is any fresh water which lies underneath the surface of the earth between rocks, sand, and soil. The rainwater is absorbed from the ground surface and withheld between these rocks and soil underground. It constitutes to 30% of the total fresh water available on earth. Groundwater instability is mainly caused due to two main reasons – groundwater depletion and groundwater pollution.

Ground water is exploited more that the rate of its formation or contribution from rain. The groundwater pressures which remove more water may be caused by natural or man-made processes. It is mainly caused by pumping out more water quickly than it the time it takes to renew itself. This is the result of increased rate of digging wells and bore wells. Most of the agricultural fields and houses use bore wells as their main source of water for use. This causes depletion of groundwater.

Groundwater can be contaminated when various man-made products seeps into the ground. Various substances such as salts from mining sites, chemical fertilizers and pesticides from agricultural lands, toxic chemical substances and gases from plants, oil from industries, aerosol particles in air mix up with rain and thus when it seeps into the ground and contaminates groundwater. All these man-made products contaminate groundwater and makes it unfit for drinking and daily use.

At present the world is facing adverse effects of groundwater depletion. When the groundwater depletes, it mainly disrupts the water cycle and thus changes the climate and rainfall pattern. This also results in land subsidence where the land collapses due to lack of support. Along with this it decreases the volume of water in other freshwater bodies like lake, rivers, and ponds, which adversely affects the survival of biodiversity. Biodiversity is again affected adversely due to decrease in the rate of crop production. Crop production decreases as 40% of the agricultural land in the world depend on groundwater as the source of their irrigation. This may also have an adverse impact on the socio-economic factor of the countries. Groundwater contamination deteriorates the water quality.

LEGALITY OF ACTIVITIES WHICH RESULTS IN GROUNDWATER INSTABILITY

The Indian government formulated National Water Policy (NWP) to govern the planning and development of water resources and their optimum utilization. The NWP was first adopted in September 1987. Later it was reviewed and updated in 2002 and 2012. Following are some of the regulations under NWP which prevents the groundwater depletion and its instability:

This incentivizes the efficient use of groundwater and also encourages community-based management. It has undertaken various projects, one of those being artificial recharging project. This recharges the groundwater artificially by adopting with the help of technological machines and tools and thus maintains groundwater stability.

The demand of groundwater among the population is very well managed by switching to small local level irrigation through small bunds, field ponds and so on. Along with this it monitors the water use pattern to check unacceptable depletion of groundwater.

To ensure groundwater stability, they have reviewed and updated groundwater pricing. They have introduced reverse under-pricing of electricity and have implemented separate electric feeders for irrigation.

National Water Informatics Centre is an autonomous center for research in water policy. It adopts the re-training programme for water planners and managers to check mainly into the issue of groundwater instability.
The policy treats water as an economic good. It believes “Water needs to be managed as a community resource held, by the state to achieve food security, livelihood, and equitable and sustainable development for all.”

This was adopted by UN General Assembly in 1997 by a large majority. Equitable and reasonable utilization and the obligation not to cause harm, protection of the environment are the provisions under this convention which protects the stability of groundwater. But this convention is yet to come into force.

Convention on environment impact assessment in a transboundary Context, 1991 (Espoo Convention):
This notifies when the annual volume of abstraction of groundwater from a shared aquifer amounts to 10 million cubic meters or more. By this it checks on to adverse effects on groundwater.
Some of the other international conventions or instruments which ensures the groundwater stability includes:
· UN ECE Convention on the Protection and Use of Transboundary Watercourse and International Lakes 1992 (Helsinki Convention).
· SADC Protocol on shared Watercourse systems 2001.

We can prevent groundwater depletion and maintain its stability by adopting some of the effective precautionary measures like using non-toxic chemicals instead of chemical fertilizers or pesticides and not allowing it to run off and contaminate groundwater. Use of native plants in the surrounding landscape increases the level of groundwater and maintains its stability because, the trees help in withholding a large amount of rainwater and thus the same gets added on to the groundwater for further use. Watering the agricultural lands wisely whenever it is needed the most also helps in regulating the stability of groundwater and in maintain regular and appropriate water cycle. Due to excessive use of groundwater as a source of freshwater these days, it is very much important to retain the sustainability of the same as we do for other water resources.