An act known as the Foreign Exchange Management Act was formulated by the Central Government of India to promote international commerce and crosswise the borderline trade in India. In 1999, “the Foreign Exchange Management Act (FEMA) was”adopted to regenerate the previous FERA act. In order to fill all the gaps and drawbacks of the FERA (Foreign Exchange Control Act), FEMA was conceived and several economic reforms (major reforms) were then implemented under the FEMA Act. In order “to d-regularize and have a liberal economy“in India, “FEMA”was effectively introduced. 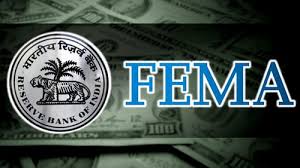 Ø “In the general” public “interest, the Government of India” may limit the execution of foreign exchange deals within the current account by an approved person.
Ø Without the approval of FEMA, all financial transactions relating to international securities or exchanges cannot be carried out. All transactions must be done by “Approved Persons.”
Ø Empowers RBI to limit funds financial credit transactions “even if” they are “carried out” through “an” approved “individual”.
Ø It gives “the central government” powers to monitor “the flow of payments to and from” an entity located “outside the country”.
Ø In accordance with “this Act, Indians residing in India” are allowed to carry out overseas trade transactions, overseas safety dealings or the right to keep or own immovable property in a foreign country in the event that security, property or currency has been acquired or owned when the individual is residing outside the country or inherits the property from a person residing outside the country.

FEMA aims at facilitating global deals as well as expenses and at fostering the methodical growth and preservation of the overseas currency marketplace.[ii] The Act has allocated the Reserve Bank of India (RBI) an important role in FEMA’s management. The Reserve Bank of India shall, in consultation with the Central Government, lay down the laws, regulations, and standards pertaining to several parts of the legislation. This legislation allows the Central administration to designate as numerous Central Government Officers as Adjudicating Authorities to conduct investigations relating to the violation of the Act. The “appointment of one or more Special Directors (Appeals) to hear appeals against the orders of the adjudicating authorities” is often provided for. An Appellate Tribunal for Foreign Exchange will also be formed by the Central Government “to hear appeals against the orders of the Adjudicating Authorities and the Special Director (Appeals). FEMA provides” that a Director of Compliance shall be created by the Central Government “with a Director” and any “other officers or class of officers it” deems robust to take up the “investigation of the contraventions” referred to in “this Act”.

In India, in 1973,[iii] the Foreign Exchange Regulation Act (FERA) was a law that enforced strict restrictions on certain forms of payments, overseas trade transactions “(FOREX) and securities and transactions” that “had an indirect” effect “on foreign exchange and the import and export of” currencies. With this goal of controlling payments and foreign exchange, the bill was formulated.[iv] With impact from January 1, 1974, FERA came into force. “FERA was introduced at a time when” the country’s “foreign exchange (FOREX) reserves were” poor and “FOREX was a scarce commodity”. Therefore, “FERA” continued with “the presumption that all foreign” exchanges received “by Indian” citizens were rightly owned by “the Government of India and had to be” obtained also handed over “to the Reserve Bank of India (RBI)”.

FERA was unable to regulate practices such as the proliferation of Multinational Companies. The 1991-1993 compromises made to FERA revealed that FERA was on the threshold of being obsolete. It was agreed, after the 1993 amendment to FERA, “the act would become FEMA. This was done in order to” ease “the foreign exchange” restrictions “in India”. In 1998, “FERA was” abolished “by Atal Bihari Vajpayee’s” government “and replaced by the Foreign Exchange Management Act, which liberalized foreign exchange controls and” foreign investment “restrictions”.

In the overseas exchange market, the purchase as well as the sale “of foreign currency and other debt instruments by” companies, “individuals and governments” takes place. Besides being very competitive, both in the world and in India, “this market is also the largest and most liquid market”. Changes and developments are continually underway, which can either be advantageous to a nation or subject it to higher risks. Foreign exchange market management is important “in order to” minimize as well as prevent the threats involved. “Central banks would work” for “an orderly functioning of transactions” that would enable their foreign exchange market to grow as well. Foreign Exchange Market The need for foreign exchange management is significant, whether under FERA or FEMA’s power. An appropriate “amount of foreign exchange” must be preserved.

FEMA served to make foreign trade dealings simpler along with RBI’s approval were no longer needed for transactions involving current accounts for external trade. Instead of controlling, the transactions in Foreign Exchange were to be ‘regulated’. The transition to FEMA reflects the shift in terms of resources on the part of the government.

· Head Office of FEMA, also known as Enforcement Directorate, headed by the Director is located in New Delhi.
· There are 5 zonal offices in Delhi, Mumbai, Kolkata, Chennai, and Jalandhar, each office is headed by Deputy Director.
· Every 5 zones are further divided into 7 sub-zonal offices headed by Assistant Directors and 5 field units headed by Chief Enforcement Officers.

“BENEFITS OF THE ACT”

“FERA was to regulate everything that was” listed for overseas trade, while “FEMA” provided “that” ‘anything “other than what is” clearly protected “is not” regulated.’ FERA’s overarching goal “was to” control “and minimize foreign” currency “and securities” transactions, “while FEMA, on the other hand”, sought “to” help establish “a liberal foreign exchange market in India. This” variation “in” language “reflects” the government’s “seriousness” with respect to “foreign exchange” deregulation “and” the “promotion of” the “free flow of international trade”.

“Section 5 of the Act” eliminates limits “on” the “withdrawal of foreign” currencies “for the” purposes “of current account transactions” in order to encourage external trade. Since foreign “trade, i.e. imports” / exports “of goods & services”, requires current account “transactions, there is no need” to obtain “RBI” permits “in” connection “with” external trade “remittances”.

Ø Free current account purchases, subject to fair limitations which may be imposed.
Ø “FEMA is” a “regulatory mechanism that” allows the “RBI and” the “central government to pass” foreign exchange “regulations and rules” in line with India’s foreign trade policy.
Ø Without any prior permission from RBI, “any person” can “sell or” withdraw “foreign exchange and” can “then” notify RBI later.
Ø “FEMA is more concerned with” leadership “than” with “regulations or” controls.
Ø Dealing in foreign exchange through licensed individuals such as registered dealers or money changers, etc.[v]
Ø The Capital Account convertibility possibility was recognized by FEMA.

FUNCTIONS OF RBI UNDER FEMA

“The Foreign Exchange Management Act” (“FEMA”) envisages “a” central role for “the Reserve Bank of India” (“RBI”) in foreign exchange management. Under FEMA, the major RBI roles are as follows:

B) “RBI cannot” place “any” limits “on” transactions in the “current account”. In consultation with RBI-Section 5, these can only be imposed by the Central Government.

· Shift or question of Resident Foreign Security and Non-Resident Indian Security;
· Loans and loans “in foreign” currencies “or to a foreign person”;
· Currency “export/import” or “currency notes”;
· Immovable property “transfer outside India”;
· “Giving” guarantees “or” guarantees in the case of foreign exchange transactions- “Section 6(3)”.

“FEMA” allows “only authorized” foreign exchange dealers or foreign security dealers. Under the Act, such “an authorized” individual “means an authorized dealer”, a “money changer”, an “off-shore banking unit, or any other person” authorized by “the” Reserve Bank for the time being. The Act thus “prohibits any person” not being “an” authorized “person from dealing in or transferring any foreign exchange or foreign security to any person”. Make “any payment” in any way “to or for the” loan “of any” individual “resident outside India”. Otherwise, obtain “any” payment by order “or on behalf of” any “person residing outside India” in any manner “through an” approved “person”.
“Enter into any financial transaction in India as” compensation “for or in association with acquisition or” development “or transfer of a right to acquire, any asset outside India by any” individual “is resident in India which acquires, hold, own, possess or transfer any foreign exchange, foreign security or any immovable property situated outside India”.