The above slogan was first heard at the start of the Modi regime. So, on May 26’2019, when the Central government celebrates its power, one ministry — “the Ministry of Chemicals and Fertilisers” — will be in focus. The reason: Its tagline — “Farmer’s India — Kisan Ka Maan – Desh Ka Samman, Khet use Khane ki Thaali Tak.” Through this article, I will like to draw light to the condition of farmers in the Modi regime. 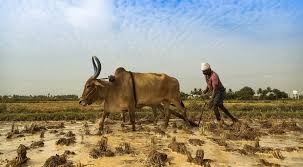 From 2014, the Bhartiya Janta Party has been pushed into damage control mode over the agricultural crisis in the country, in the previous year i.e. 2019, after suffering electoral losses and constant protests.
One of the major challenges that the Modi government faced was tackling agrarian[1] distress in the face of slack markets, flawed import and export policies, and demonetization [2]. That is why, since then farmers are being engaged in constant protest. Bhartiya Janta Party’s election manifesto “Sankalp Patra Lok Sabha 2019” gives a major push on rural development and addressing farmer issues, apparently in line with Prime Minister Narendra Modi’s vision to double farm incomes by 2022.

The Indian Farm Reforms of 2020 refer to three agricultural bills passed by the Parliament of India on 27 September 2020. The bills collectively seek to provide farmers with multiple marketing channels and provide a legal framework for farmers to enter into pre-arranged contracts among other things. The three laws are the Farmers’ Produce Trade and Commerce (Promotion and Facilitation) Act, the Farmers (Empowerment and Protection) Agreement on Price Assurance and Farm Services Act, and the Essential Commodities (Amendment) Act, which came into effect following the approval of President Ram Nath Kovind

Protests against the acts picked up in September 2020, particularly in Delhi, Punjab and Haryana, where farmers have been at the forefront.
The act is further explained as follows:-
1. Farmers’ Produce Trade and Commerce (Promotion and Facilitation) Act, 2020

“Actually, this seemingly odd finding holds the key to understanding the mood of the Indian farmers captured in some survey. Farmers who are relatively better off are also more unhappy about their lot, more anxious about their future, and angrier about the latest farm acts passed by the Modi government. Farmers across India have a sense that something big and possibly bad is on the way, something they don’t fully comprehend. They also know that farmers are angry and protesting in many parts of the country. But their own response varies. Farmers in the Northwest are angry, those in the West are anxious, those in the south are unsure, those in the East are placid and their counterparts in UP and Bihar are oblivious to everything.

The farmers’ level of awareness about the laws and farmers’ protests surprise us. As many as two-thirds of the farmers (as many as 91 percent in Punjab and Haryana) know that farmers are protesting in the country. When asked why nearly half of them can say that they are protesting against the new farm laws. Quite impressive, I thought. Even more impressive is that two-thirds have heard about the new farm laws (82 percent in Northwest, but only 48 percent in the East), even though the awareness of each of the laws is much lower and most of them may not be able to say what these laws are about. Interestingly, WhatsApp, Facebook, and YouTube contribute about as much to the farmers’ awareness as TV or newspapers.

The bad news for the government is that the farm laws are getting a bad name among the farmers. When asked whether they are in favor or against these laws, the verdict is negative: 52 percent against and 35 percent in favor. To be sure, more than half of the defenders and opponents don’t really know the details of these laws. And, as expected, the responses are uneven across geographical and class divides. Yet, this general negative impression is what matters in politics.

The surveys show that the farmers’ reservations against these laws are driven by three real anxieties. One, they fear that the existing mandi system may be dismantled. Nationally, about 39 percent of farmers share this anxiety, while 28 percent don’t, and one-third don’t have an opinion on it. Two, about the same proportion of farmers, fear that the government system of procurement of some crops at a minimum support price (MSP) will come to an end. Three, there is a stronger fear (46 percent yes to 23 percent no) that these laws will open the way for exploitation of the farmers by big companies. All the three fears are likely to be accentuated as the Congress governments begin enacting state laws against these central laws. These state legislation may never come into force because the President is unlikely to assent, but these can play a major role in shaping public opinion.

The surveys underline one undisputed aspiration and demand of the farmers: guaranteed MSP for farm produce. When asked whether MSP should be mandated by law, the response is a resounding yes: 59 percent of farmers vote for it while 16 percent are against it. Obviously, the support is higher (81 percent in the Northeast, 80 percent in the West) in areas that have a functioning system of procurement and among those farmers who sell their crops for MSP. But the votaries of MSP outnumber the skeptics even among farmers and regions that don’t currently benefit from government procurement. No wonder, BJP leaders find it very hard to respond to farmers on this specific demand. Their task is harder after the laws passed by the Punjab assembly.

The All India Kisan Sangharsh Coordination Committee (AIKSCC), the largest coalition of farmer organizations in the country, has given a call for “Dilli Chalo” on 26 and 27 November. Before this street-battle takes place, the next one month will witness a battle for farmers’ minds.

The government and a section of the media would live in denial if they see and present it as a rebellion of the entitled. The opposition and farm activists would indulge in a wishful fancy if they interpret it as a revolution of the enlightened vanguard. As of now, it is no more, and no less, than an outcry of the, enabled, of those who have what it takes to stand up and speak up. Such an outcry tends to percolate. If so, the Modi government is on a losing wicket.”