In this case, the Supreme Court resolved the jurisdictional conflict between the CCI and Telecom Regulatory Authority of India and the interplay of roles of the two regulators. 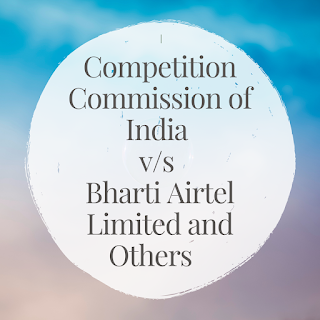 The Reliance Jio Infocomm Limited (RJIL) filed an application under Section 19(1) of the Competition Act, 2002, alleging abuse of dominant position and cartelization by Bharti Airtel, Idea Cellular Limited, Vodafone India Limited (the Incumbent Dominant Operator- IDOs) and the Cellular Operators Association of India (COAI) for the infringement of Section-3 and Section-4 of the Act. RJIL alleged that the cartel restricted it to enter into the telecom market by denying the sufficient number of Point of Interconnection (PoI) to it. Further, RJIL filed an application before TRAI to monitor the conduct of IDOs and COAI.
CCI’s order (directing investigation under Section 26(1) of the Act) on the above application was challenged before the Bombay High Court which held that the CCI had no jurisdiction in the matters of telecom sector as in the instant case, the matter was also referred to TRAI which is technically well equipped to deal with the said issue. Aggrieved by the impugned order of the High Court, CCI and RJIL challenged it before the Supreme Court by way of special leave petition.

The Apex Court dismissed the appeals filed by the CCI & RJIL and upheld the decision of the Bombay High Court has deftly resolved the long debated scuffle for predominance between the overarching fair market watchdog, the CCI and the sector specific regulators, the Telecom Regulatory Authority of India (in this case) by deferring scrutiny into any possible coordination or collusion between the existing telecom players through the platform of COAI or otherwise by CCI.
Further, the Court whilst upholding its previous judgement in the SAIL case on the nature of the CCI prima facie order under Section 26(1) of the Act, for the first time, made a demarcation between examination of competition issues by the CCI in a sector having a statutory regulator and a sector without one. The Court adduced the need for use of Section 21A of the Act, which makes it obligatory for the CCI to procure opinion of the sector regulator on sector specific issues first. This way, the Court eventually showed a middle way to sort out the long-debated jurisdictional conflict issue between the CCI and sector regulators. By invoking the doctrine of harmonious construction, the court has maintained an equilibrium by giving TRAI the authority to determine the rights and obligations of the parties first, and then if it apprehends the existence of anti-competitive act, evokes the jurisdiction of CCI.
While concluding the case, the Supreme Court followed the existing jurisprudence of the USA (Credit Suisse & Verizon Communication Case)