The class in which different kinds of people are placed according to their occupation, economy, caste, and wealth is called the class system. The class involves a set of people who share the same status with regard to factors like wealth, income, education, and occupation. Feeling of superiority & inferiority. 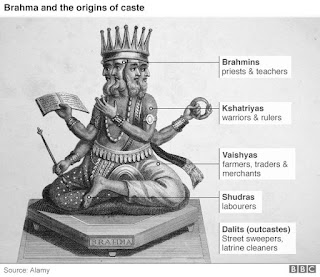 Caste is a closed social system in which membership is determined by birth and does not change for life. Marriage is not allowed outside one’s caste, children are automatically members of their parents’ caste. Unlike caste systems, class systems are open. In a class system, occupation is not fixed when a person is born.

● It is based on birth, when a person is born Lower class, he should remain the same for life. Status, position prestige is fixed according to his caste.
● The higher caste people are usually economically better off and the lower caste people work harder and yet they get a little benefit that makes them poorer.
● Social Hierarchy is found in caste culture.
● There is occupational restriction & hereditary occupation, occupation is fixed by your caste. A blacksmith’s son will always be a blacksmith.
● In the caste culture, there is a restriction on the food too. The members of the higher caste can’t take food from the lower caste.

Equality means being equal where everyone is treated the same, given equal opportunities, and not discriminated against on the basis of caste, class, gender, and religion. The right to equality includes equality before the law. Discrimination on grounds of religion, race, caste, sexual orientation, gender, or gender identity is not allowed. The State shall not deny any person equality before the law.in Caste and class System when a person from the upper class and Lower class commit the same crime, only the person from the lower class will be arrested and not the one from the upper class.
There should be equality of opportunity for all citizens despite their religion or class. All people should be treated the same,e in the eyes of the Law. There should be equality of opportunity in matters of public employment.

●The caste system has promoted untouchability. It has condemned large groups of people to degrade themselves without any hope of redemption.
●Discrimination
●Division of labor whereby the poor are made to work hard and moreover hardships are imposed on women.
●It has promoted slavery, the lower class are made to work without any payment or paid very little money
●There is no quality before the Law.

●Class system is achieved yet Caste Culture is inherited. A child after birth takes after the status of the parents.
●Class System is secular or optional and Caste Culture is religious or traditional.
●The caste system is rigid meaning they have to preserve traditions and the Class system is a flexible system is a social division, there’s a free association of different castes. A child may be born and then belongs to the status of his parents but later on, he can achieve more for himself.

Where one is born in the caste hierarchy often determines access to public institutions. Being born in a certain family, caste, and class decides which religious sites one can visit, the schools one can attend, and the job one may do. The Lower class is held captive from an early age. They can’t even attend good schools as they are for the rich, the upper class. Even if the lower class attend schools, they are still not allowed to work in certain jobs due to their Caste. However, the parents of the lower class children have stopped investing money in the education of their children as It has no use. That is why most of the girl children end up getting married at an early age. However, quite often, young men from lower castes have been unable or denied to convert their skills and educated status into secure employment.

Many would argue that education is the way forward but the caste hierarchy acts as a barrier to domestic development. Literacy rates around the world have been linked to the success of an individual and their respective country economically and socially.

Role of Caste in the Indian Education System

Education is an important tool for a country to develop its economy. A more skilled population will facilitate the development process. Education is a powerful instrument for reducing poverty and inequality and improves the standard of living, yet a child’s access to quality education is restricted by their class and caste.

The Right to Education Act guarantees compulsory primary education up to the 8th grade but there is a favor in who receives a good quality basic education. The elites continue to benefit from the subsidized education that the government gives. Now the problem is that children of the poor who have studied in government schools find it difficult to compete with the rich ones who have studied in good private schools. That’s why mostly in India the rich are the ones who can speak English because they are taught in schools yet the poor are not taught. Children from the lower Caste end up not going to school thus promoting child labor. Education should empower individuals as well as society in removing the Caste-based hierarchy.