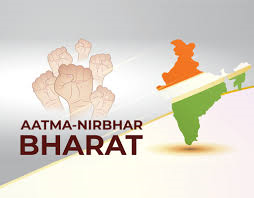 The word “Atmanirbhar” means “self-reliant”. You are confident in your abilities and able to do things for yourself, you don’t need help from other people. A self-reliant man has some goals that he has set for himself. His aims are not merely those things other people think he should do. The self-reliant man is sovereign and doesn’t overly rely on others to validate his decisions. Self-reliance such as learning to tie one’s own shoes gives children a sense of satisfaction and feeling that he has achieved something. Self-reliance is the capacity to depend on yourself to get things done and to meet your own needs.

On Aug 15, Prime Minister Narendra Modi unfurled the Indian flag at the Red Fort to mark India’s 74th Independence Day. Addressing the Nation, the PM has stated about several issues ranging from administration of the Covid-19 pandemic, considering to improve domestic manufacturing as part of the Atmanirbhar Bharat Abhiyan, making a move to revive the economy with the main focus on middle-class people. He said that making farmers self-reliant has been a keystone of the Atmanirbhar Bharat Abhiyan and is also proving to be a value addition to fulfil the needs of the global market.The government announced the “Atmanirbhar Bharat Abhiyan” so as to revive every domain of the economy from demand, supply to manufacturing, and make India self-reliant to sustain and take down any Black Swan event in the future. Highlighting key agricultural reforms, he reveals that farm trade has been freed up from all restrictions, enabling the facilities for farmers to sell their products anywhere in the country. By making similar with soap or cloth manufacturers who were able to sell their products anywhere at their own will, he also stated that even after over seven decades of Independence, farmers have not yet enjoyed the freedom to trade their own commodities beyond local markets. He further added that Atmanirbhar Bharat does not only means reducing dependence on imports but also strengthening India’s capacity, creativity and skills. By following the 74th Independence Day speech, The Prime Minister has repeated the importance of Atmanirbhar Bharat and assured full support to fellow Indians during the need of the hour. Over 130 crore Indians have decided to become ‘Atmanirbhar’ in the middle of the coronavirus pandemic. Becoming an Atmanirbhar person is mandatory. I am assured that India will realize this dream. I am also assured with the abilities, confidence and potential of my fellow Indians. He further asserted that, once we decide to do something, we do not rest until we achieve that goal. Meantime, the Vice President ‘M Venkaiah Naidu’ stated on Aug 15 that, it is the correct time for an objective introspection. At this phase, we must have to ask ourselves what we aspire to achieve as a nation by 2022. By 2022, India must have to become Atmanirbhar (self-reliant) in every sense of the word. We all must work with renewed strength and determination to remove poverty, end social and gender discrimination and also eliminate corruption.

What is the concept behind Atmanirbhar Bharat Abhiyan?

The centre of attention of the concept is to make the nation self-reliant with more focus on local manufacturers and service providers. This will strengthen the economy also enhance the standard of living and most importantly upgrade the trade deficit and the exchequer balance of the country. Making the country self-reliant in all domain from manufacturing to supplying. It will help the country to reduce its dependency on imports and it may also increase the exports. The fall in imports will help in reducing the trade deficit and it will eventually lead to a trade surplus. And it will also ensure that the country is able to sustain and tackle any unpredictable event that may emerge in future. The beneficiaries of this Abhiyan will be: farmers, poor citizens, migrant workers, small scale industries, cottage industries, fishermen, cattle ranchers, middle-class industries, tenants, peoples who are working in organized sector or unorganized sector etc.  The package will mainly focus on land, labour, liquidity and laws, so as to achieve self-reliance. The relief measures were announced by Nirmala Sitharaman, Finance Minister of India.

Atmanirbhar Bharat Abhiyan Package Break-up: The complete break-up of the package launched to make India ‘self-reliant’ in the middle of Covid-19 time.

This set the relief measures of worth Rs. 5,94,550 crore and also includes funding as well as loan guarantees for MSMEs, NBFCs/HFCs, discoms, contractors, real estate and salaried workers.

This set the relief measures of worth Rs. 3, 10,000 crores with main focus on migrant workers, small farmers, street vendors and the poor.

This sets the relief measures of worth Rs. 1, 50,000 crores. The core focus of these measures is on the agriculture and allied sectors like dairy, animal husbandry, and fisheries so as to strengthen the overall farm sector.

The package, however, failed to boost the confidence and to bring some hope among the corporates, as because the focus of the package is more on indirect benefits than on direct benefits. The government should have to design those packages which will provide cash support rather than relying more on loans. I think if a person depends on another person can never progress or succeed in life. If we look at the resources of our country, India is a prosperous country. Even in a serious and dangerous epidemic like coronavirus, our country did not ask for help from any other country during the lockdown. It shows that our country is so capable that even in an emergency situation we can tackle any pandemic, the Indian government has given life to millions of people by taking some necessary steps on time. And also announced an economic relief package worth billions of rupees so that no one died because of hunger in the country. If we do a small comparison, even after India was liberated from British rule in the year 1947, India was dependent on another country with few resources. But today’s India is on its way to becoming self-reliant in every field.

This article is authored by Avnish Srivastava