The contempt of court can be generally defined as willful disobedience of or disrespect to a judge or court. The rationale behind the contempt law is to sustain the dignity of judicial institutions and protect them from miscreants who aim to lower its authority by punishing them. 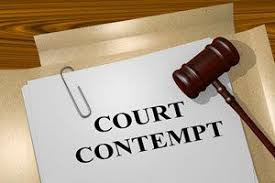 The origin of contempt law can be traced to England and its Crown. The contempt of law was the law of the Kings as they were the supreme authority exercising absolute power where the contempt law was exercised to protect the dignity and supremacy of the Kings. Any resistance to King was a sin which had its own ill effects. Later courts exercised this power and whosoever violated a court’s order was considered as an offence to the king. The court derived their contempt power from the King’s authority. Later it was also claimed that the contempt power was inherent right of English Court’s.

In India the contempt law can be traced back to the British Rule. The Contempt of Court Act, 1926 was the first legislation enacted in India which dealt with contempt of court. Section 2 of the Act empowered the High Court to punish for contempt of itself and courts subordinate to it. The punishment under the Act was simple imprisonment for a maximum period of six months or fine of up to Rs. 2000 or both. Accused was to be discharged if he renders an apology. This act was later replaced by the Contempt of Courts Act, 1952.

A Sanyal Committee was set up in 1961 under the chairmanship of the then Additional Solicitor General Shri H.N Sanyal and four other members for examining the law related to contempt of law. It examined the historical aspect of the contempt law and different judgments dealing with the contempt law. The committee recommended that confidence in administration of justice is essential but at the same time the right to personal liberty and freedom of speech and expression are to be respected. The committee also appended a Contempt of Courts Bill, 1963 to its report which incorporated its recommendation.

The Contempt of Courts Act, 1971 was enacted on the basis of the Sanyal Committee, which replaced the Act of 1952.

Section 2 (a) of the Act defines “contempt of court” as civil contempt or criminal contempt.

According Section 2(c), any act which “scandalizes or tends to scandalize”, “lowers or tends to lower” the authority of any court, “prejudices” or “interferes or tends to interfere” with the administration of justice amounts to criminal contempt. It is a more serious offence as compared to civil contempt. Presence of Mens rea is not an essential ingredient to punish a person for criminal contempt if an act complained of is likely to interfere with administration of justice[iii].

In Delhi Judicial Service Association v. State of Gujarat[iv] the Supreme Court observed that criminal contempt is wide enough to include even an act which is likely to interfere with the administration of justice or which lowers the authority of the court.

A contempt of court may be punished under section 12 with simple imprisonment for a term up to six months or a fine up to Rs. 2000 or both.

Truth as a Defence:

The legislature brought The Contempt of Court Amendment Act, 2006 and allowed truth to be taken as a valid defence if it was made in the public interest and defence taken is bona fide. It should not be allowed as a defence if it is used as a disguise to escape the consequences of deliberate attempt to scandalize the court or interference with the administration of justice[v].

Article 19 (1) (a) of the Constitution of India guarantees freedom of speech and expression but contempt law is considered a reasonable restriction upon this right under Article 19 (2). The Supreme Court in E.M Sankaran v. T. Narayanan[vi] observed that the Constitution guarantees freedom of speech and expression as a fundamental right, but the same Constitution has imposed a restriction on this right in the name of contempt of court and therefore it cannot be said that this right is superior to the contempt power. The Court further stated that these provisions are to be read with Article 129 and 215 of the Constitution. Article 129 and 142 (2) provides power to the Supreme Court to punish for contempt of itself while Article 215 endows the same power upon the High Courts.

Also Dr. B.R Ambedkar in Constituent Assembly Debates stated that “once you make a court, a court of record by a statute then the power to punish for contempt follows from that position”.

The contempt law has undergone a harsh criticism in the last few years. The main problem with the law is that it put unreasonable restrictions on the fundamental right of freedom of speech and expression. The other contention is that the major democracies including England, where the law originated, had abolished this law a long ago. The law is also seen as problematic as the proceeding is initiated with the presumption of guilt rather than innocence where the Court acts both as a prosecutor and victim. Also the authority vests with the Court to define what act scandalizes or lowers the authority of the court.

The Judiciary needs to reexamine the scope of the contempt law with the current need of the society. The law being flexible may cause more harm than good. The pendency of a high number of contempt proceedings reflects how often courts are getting used to invoke the contempt law. The law should be exercised sparingly and should not be used as a tool to silence fair criticism.

The preference should be given to the words of Lord Denning “Let me say at once that we will never use this jurisdiction as a means to uphold our dignity. That must rest on surer foundations. Nor will we use it to suppress those who speak against us. We don’t fear criticism nor do we resent it”.

This blog is authored by Shikhar Bhardwaj